Why we need to be honest with students and PhDs about the academic job market.

Learn More About the Center

In my work at Beyond the Professoriate, I have the opportunity to speak with graduate students and PhDs about their career plans. And over the past few weeks, I’ve had the same recurring conversation about the realities of the academic job market.

Just last week, I was speaking with a PhD student who came out of a professional background. He was in the first year of his PhD program, and wanted to think through options. His advisor had recently asked him what kind of institution he planned to work at after he graduated — would he like to be at an R1 institution or would he like to be at a small liberal arts program?

I explained to him that you don’t get to make choices like that when you’re on the academic job market. There are so few jobs, and so many people, that if you want a tenure track job, you’ll have to move wherever you can go, if you can get one. We looked at the academic job wiki for his discipline and he was flabbergasted. Coming out of a professional background, he had no idea just how few jobs there were in his discipline in North America. He was totally unprepared for that reality.

A few years ago, I would have been surprised by these conversations. But today, I find that in the work I do most graduate students and faculty don’t understand just how broken the academic job market is.

Yes, we know (vaguely) that there aren’t enough jobs for all the talented people. We assume graduate students do as well. As the authors in this recent survey on “Faculty Perceptions of Political Science PhD Career Training” note, “almost two-thirds [of faculty surveyed] believe that students were aware of the limited prospects when they began [their program], and less than 40% of the respondents agreed that students ‘are convinced that they will be successful in the job market.’”

But the devil is in the details. And that is what PhDs need to make informed career decisions—accurate, clear data about what jobs are available and who is being hired for these positions.

Right now, people are making life-changing decisions with significant financial, emotional, and psychological implications, without proper data to do so. And its ruining lives.

Here’s the information people need, and here’s how it could be collected.

But what people really need to know is who is being hired for these positions.

A few years ago, I was hired as a contractor to do this exact study for an organization (the data wasn’t published). I looked at who landed tenure track jobs in 11 academic disciplines, so I know it’s possible to gather this information. Ideally, this would be a project hosted by professional associations, since they generally have information on job postings. And “who was hired” could be crowd-sourced. This is public information. Job ads are public, so too are faculty directories. It just needs to be collected in a way that can be studied, analyzed, and presented.

The American Historical Association has always been at the forefront of collecting employment data. In its most recent jobs report, people learned that history PhDs are most marketable ABD or year 1 on the job market. Twitter lost its mind.

But that information is so important for people to know. If you’re wondering if you should give the job market another go, or exit for a different career, knowing that you’re less likely to get a job with each passing year, you can make the decision knowing it’s the right call. You don’t have to wonder or second guess, like I did, when I decided to leave academia after three years on the job market.

Imagine the reckoning in academia if this data was collected and made available to people!

In the study I did, I learned that over 50% of the jobs in humanities and social science disciplines went to ABDs and year 1 on the job market. I also discovered that less than 3% of jobs went to people with the title of adjunct. In STEM, people landed jobs within the first 5 years of earning their PhD. I found that in several disciplines, over 50% of the jobs were being filled by alumni from a tiny number of programs. We don’t have a national job market. PhDs from elite programs have a national job market. Most other graduate students have a much more limited and local job market.

If you knew, based on data, that an adjunct career was not a gateway to a stable academic career but a gateway into poverty, would you continue?

If you knew that a second or third postdoc didn’t improve your odds of landing a job (and it didn’t help you land a job in industry), would you do that additional postdoc?

What if you knew that almost nobody from the institution you were earning your degree landed tenure track jobs? That the job market was bad, but it was impossible for someone out of your program?

What if the jobs are going to elite programs, and not to students who are coming out of state schools, which tend to have more diverse graduate student populations?

If 50% of the jobs in your discipline are going to just a handful of programs, and those alumni tend to train other graduate students … we would see just how few scholars are shaping entire fields and disciplines.

I’m not sure how programs or disciplines would respond. But I know that this information can move people to make dramatic, and necessary, career changes.

When I first met Ali, she was one of the estimated 25% of adjuncts surviving on government assistance. She was broke and wondering how she was going to provide for herself and her son. She called me to discuss her options. Her plan was to leave Virginia and relocate to Portland, a city where she thought she could earn a living. Maybe she would write a book and online teach, and maybe try the academic job market again.

With my usual candor, I shared with her data on the academic job market. Then we got to work thinking about her skills, values, and marketable skills. She started doing informational interviews and after several months, decided to abandon academia for a career in UX research.

For the first while, she did freelance and contract work, which is not uncommon for PhDs in career transition. Because PhDs lack linear work experience in professional career fields, they often have to spend sometime in entry level or contract work before they’re able to land more secure employment. The difference between contract work in industry and contingent work in academia, is that contract work can actually help you build your career. It allows you to demonstrate that you can apply your skills to solve employers problems, learn a new career field, and build a network.

Within eighteen-months, Ali had landed her first full-time job. Four years later, she works at Amazon Cloud Services and makes a salary well in the six-figures.

But she needed information and perspective:

“I want to thank you for your clear-eyed, class-conscious guidance back when I was desperate for help getting started… After all those years of being food poor! You helped me recognize my worth in industry. Thanks for getting me started on this pathway only 4 years ago.”

80% of Humanities PhDs want to be professors. 56% of STEM PhDs also see a faculty career as their first choice. And like Ali, to leave — to give up on that dream — often involves a dramatic “aha moment.” Way too often that “aha” moment is being broke, a marriage on the rocks, depression, anxiety, burn out.

At that difficult moment, they begin to ask what else they can do with their degree. They begin to seek out other career opportunities. Hopefully, like Ali, they discover that outside of academia, there are so many opportunities for smart, creative people. And that there are jobs that align with their values, use their skills, and where they can make a liveable wage.

They discover that academia isn’t the only place where they can be happy – in fact, they were miserable in higher ed. Outside of academia, they can move to a city where they want to live, change jobs, negotiate salaries.

And their work can have an enormous impact on the world.

They learn that they don’t have to choose between a meaningful career and making a living. They can do both.

Something they couldn’t find in academia.

Better information would help PhDs at every step of their careers make informed career decisions and prepare for a range of career options. They could take on calculated risks, and know when to walk away.

They would understand that not landing a job is not a personal failing, but a reality of a broken academic system. 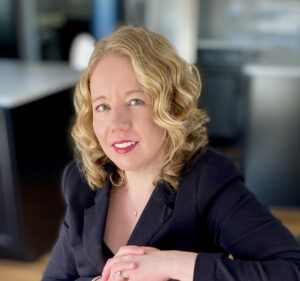 L. Maren Wood earned her PhD in History from the University of North Carolina at Chapel Hill. She is the Founder of the Center for Graduate Career Success (Beyond the Professoriate and Beyond Graduate School).

Get updates on our latest research & products.

We develop research-informed webinars for students, career centers, and institutions. Sign up for our mailing list and be the first to know when we release new research and webinars.